Stories, blessings and recipes to illuminate your holiday from Thursday, November 28 to December 6, 2021.  Celebrate With Your CBH Haverim!

To navigate this page, here are some Quick Clicks:

In anticipation of Hannukah, our Partnership Committee will be hosting our annual Hannukah Hike on Sunday, November 28th.

Join us for a very special FB Live gathering on the first night of Hannukah, Sunday, November 28th at 5 p.m. (Pacific time) with your Reform Jewish family across the country! You will be able to access the celebration at facebook.com/ReformJudaism. The Hannukah gathering will be just about 30 minutes long and is full of lots of light, sweetness, and some beautiful messages from really outstanding Reform Jews from around our community. 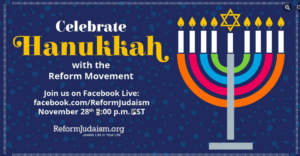 When this special presentation is over we will gather over zoom at 5:30 pm (at our regular shabbat zoom link) to kindle the Hannukah lights together and to sing some of our own Hannukah songs.

All are invited to join us for our annual Family Hannukah Shabbat service on Friday, December 3rd at 6 pm. We will be welcoming the participation of our enthusiastic 5th grade/Gimmel Hebrew class. You can join the service by zoom or in person.

Enjoy a wonderful Hannukah Film Festival with a different movie each night! Here is the link to the website with all the information: www.HanukkahFilmFestival.com. Every ticket purchased with our promo code will go towards supporting CBH. We receive 50% of the proceeds if you use HAVER when you purchase. Hanukkah Film Fest 2021 Flyer v1

Our special promo code is HAVER.

Candles are added to the hanukkiyah (menorah) from right to left but are kindled from left to right.  The newest candle is lit first. On the Shabbat of Hanukkah, kindle the Hanukkah lights first and then the Shabbat candles.

Baruch atah, Adonai Eloheinu, Melech haolam, she-asah nisim laavoteinu v’imoteinu bayamim hahaeim baz’man hazeh.
Blessed are You, Adonai our God, Sovereign of all, who performed wonderous deeds for our ancestors in days of old at this season.

Build an Ice Menorah, or “Kerachanukiyah“!

Virtual dreidel if you don’t have one handy!

A video about how to make marshmallow dreidels. 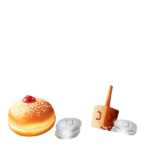 A doughnut  for each night of Hanukkah, recommended by Rabbi Greg: “written by my colleague Rabbi Debbie Prinz and also featuring my friend, Cantor Evan Kent.”