Nonprofit organizations are invited to submit applications to the Biberstein Social Action Fund for grants in support of projects addressing poverty, discrimination, abuse and neglect issues in Yolo County.

The fund was established in 2002 by the Board of Directors of Congregation Bet Haverim, Jewish Fellowship of Davis, to honor Ernie and Hannah Biberstein, who are among the founding members of the synagogue. The Bibersteins are longtime residents and have devoted much of their lives to community service and social justice. We mourn the loss of Hannah, who passed away in April 2011.

The goal of the annual awards made from the Biberstein Social Action Fund is to help groups in their efforts to meet unfulfilled needs. Special consideration is given to new and/or innovative projects.

Download the 2021 Grant Application HERE.  Completed applications, or questions, should be emailed to cbhbibersteinfund@gmail.com. Grant proposals must be submitted no later than October 8, 2021.

Questions may be directed to the Biberstein Social Action Fund at cbhbibersteinfund@gmail.com. 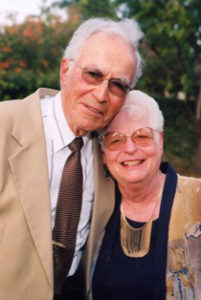 The Bibersteins were among the founders of Davis Community Meals, where they served as board members and officers. They have been active in a variety of interfaith groups including the Yolo Interfaith Immigration Network and Celebration of Abraham, which brings together Jews, Muslims, and Christians. They were recipients of the Brinley Award for community service, the Thong Hy Huynh Memorial Humanitarian Award, and the PeaceForce Award by Teach Peace.  In 2016, Ernie received a Justice Leadership Award from the Multi-Cultural Council in Yolo County.

Ernie Biberstein is a professor emeritus of the UC Davis School of Veterinary Medicine. Hannah Biberstein was a mediator in the original city of Davis mediation program, chaired the city’s Social Services Commission, and served on the Affordable Housing Task Force.