Stories, blessings and recipes to illuminate your holiday from Sunday, December 22-30, 2019.  There are so Many Ways to Celebrate With Your CBH Haverim!

Be sure to join us for this year’s joyous service celebrating Hanukkah!  Bring your family and friends, along with your Hanukkah menorah and candles to add to the special glow of this “Festival of Lights.”  We will come together for our annual Hanukkah festivities on Friday, December 27 —  the 6th night of Hanukkah!  We will begin with a special activity for our families with young children from 5:00 – 5:30 p.m. in the social hall followed by our lighting of our Community Hanukkiah at 5:45 p.m.  We will then gather in the sanctuary at 6:00 p.m. (NOTE SPECIAL TIME) for our family service with our very special guest, Rabbi Larry Milder, who will join Rabbi Greg in leading our service and will share his many musical talents with us.  Then join us for a delicious “Pot Latke” dinner at 6:45 p.m. which will begin with the communal lighting of our family Hanukkah Menorahs.  Bring a veggie (non-meat, fish ok) dish to share and your favorite batch of latkes to enjoy with our friends!  We will all then reconvene in the sanctuary around 7:30 p.m. for a lively and joy-filled musical concert with Rabbi Larry Milder.  This promises to be a fabulous time for the entire family.  There is no cost and all are invited to join us.

On Sunday, December 29, join us for a Channukah Chai’ke (hike).  We will meet at the CBH Redwood Grove for a fundraiser by our CBH Youth Group (DRTY) who will be selling cocoa/coffee/tea and sufganiot (Jewish jelly doughnuts).  After we will take a casual stroll (2.3 miles total) on the stroller, wheelchair and dog friendly paths of the North Davis Greenbelt.  There will be a fun treasure hunt along the way or you may just enjoy good friends and the incredible outdoors.  A bathroom stop is 1.5 miles into the walk. Only heavy rain will stop us!  Partners and non-partners of all ages are welcome. 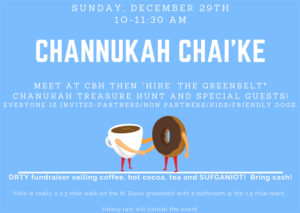 To quickly navigate this page, here are some Quick Clicks:

Candles are added to the hanukkiyah (menorah) from right to left but are kindled from left to right.  The newest candle is lit first. On the Shabbat of Hanukkah, kindle the Hanukkah lights first and
then the Shabbat candles.

Baruch atah, Adonai Eloheinu, Melech haolam, she-asah nisim laavoteinu v’imoteinu bayamim hahaeim baz’man hazeh.
Blessed are You, Adonai our God, Sovereign of all, who performed wonderous deeds for our
ancestors in days of old at this season.